I originally purchased the Urban Decay 24/7 Glide-On Shadow Pencil Stash during the 2011 Holiday Season. I loved this set so much I ended up purchasing another when it was on clearance.  I use these pencils with eyeshadow primer whenever it’s humid where I live.  On days when there is less humidity I apply the shadow pencils without primer and the color stays until I remove my makeup.  Got more than 12 hour wear from these pencils. I’ve used the 24/7 shadow pencils by themselves, as a liner and an eyeshadow base.  The regular size pencils are $20.00 each and come in 12 colors.

Urban Decay Sin on the left, Milani Champagne on the right. 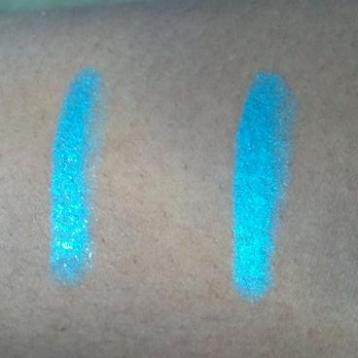 Urban Decay Clash on the left, Milani Aqua Blue on the right.

I still love the Urban Decay 24/7 Glide-On Shadow Pencils.  I admit $20.00 is a bit much to pay, but their long wear and choice in colors is worth it to me. I will still refer back to the Milani Shadow Eye 12 HR Pencil for the two shades I swatched.